The Forth Road Bridge, opened in 1964, replacing the centuries-old ferry crossing. Proposals for an additional road crossing at Queensferry were drawn up in the early 1990s. The plans met stiff opposition from environmentalists and from the City of Edinburgh Council on the grounds of the increased traffic. Following the Labour victory in the 1997 general election the proposals were shelved. The existing bridge had a planned life of 120 years, but by the early years of the 21st century the planned capacity for the bridge of 11 million vehicles per year, had risen steadily to 23 million vehicles in 2006. Between 2003 and 2005, an inspection programme found that the main suspension cables had suffered an estimated 8–10% loss of strength as a result of corrosion. Projections highlighted the likelihood of an accelerating loss of strength, with traffic restrictions to limit loading required in 2014 in the worst-case scenario.

The strategic transport importance of the road bridge and the threat of closure by 2019 if major structural work was not successful led to fears of serious economic consequences, especially as work on a new crossing was estimated to take up to 11 years. In 2003 Scottish Transport Minister Nicol Stephen commissioned a new study, which priced a second Forth Road Bridge at £300 million. The Forth Estuary Transport Authority voiced support for a new bridge in 2005, and in 2006 the UK Transport Secretary, Alistair Darling, spoke in favour of the idea.

In 2007, the Forth Replacement Crossing Study was commissioned by Transport Scotland to examine various options for new bridges or tunnels across the Forth. The report recommended adoption of a Cable-Stayed Bridge located to the west of the Forth Road Bridge, as the preferred solution. The study concluded that this option was significantly cheaper than a tunnel, would take less time to construct, and would represent better value for money, though it was noted that a tunnel would have fewer environmental impacts. In December 2007 finance secretary John Swinney announced that a new cable-stayed bridge would be constructed, with an estimated cost of between £3.25 billion and £4.22 billion. He claimed it would be “the largest construction project in a generation in Scotland”.

There was opposition to the project on environmental, traffic and cost grounds, but this did not prevent the project going ahead.

The Scottish government announced in December 2008 that public funding would be used. As part of the Scottish Government’s Strategic Transport Projects Review, the new Forth crossing was priced at between £1.72 billion and £2.34 billion. Under the revised scheme, the existing bridge would be retained for public transport, cyclists and pedestrians, and the new bridge will be operational by 2016.

A joint venture between consultancies Arup Engineering (UK), and Jacobs Engineering (USA) was appointed as project manager, and in February 2008 environmental and technical studies were begun, continuing through till 2009. Public consultations were held, and some changes to the scheme were made in response to the comments received. The Forth Crossing Bill was introduced into the Scottish Parliament by John Swinney in 2009. A majority of MSPs voted in favour of the new legislation on 16 December 2010, and the Forth Crossing Act received approval in January 2011.

There have been three main contractors for the full scheme:

Preparatory works for the new bridge began in September 2011 with works beginning at the southern end of the M90 to build the northern approach roads. Construction works were scheduled to take around five and a half years, and the bridge is currently scheduled to open in May 2017

Firstly, the Beamer Rock, previously host to a lighthouse, was removed to make way for the central tower of the new bridge. 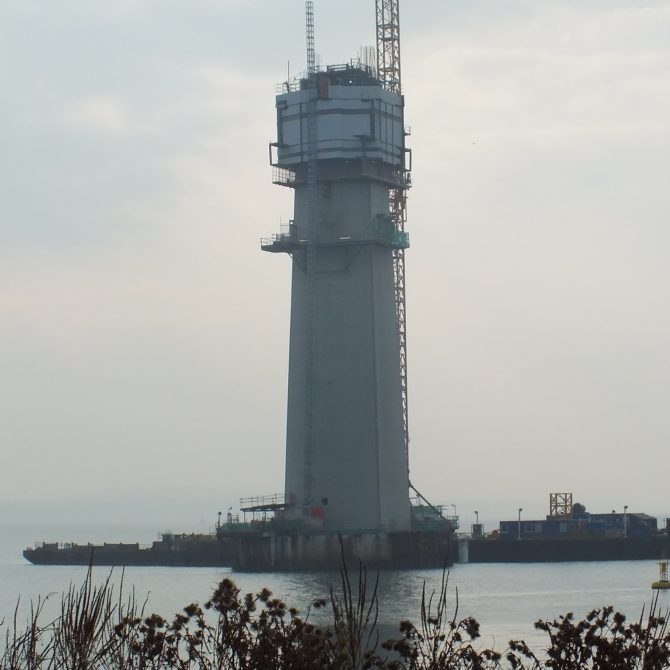 The new bridge is a cable-stayed structure, with three towers each 207 metres (679 ft) high. Including approaches, the overall length of the bridge will be 2.7 kilometres (1.7 miles); it will subsequently become the longest triple tower cable-stayed bridge in the world. The bridge will carry motor-cycles, cars and heavy goods vehicles, while public transport, cyclists and pedestrians will use the existing bridge. Wind shielding will be built into the design, to enable use of the bridge in high winds, which regularly led to restrictions on the existing bridge.

Construction began in earnest in Autumn 2011 following the completion of a two-year procurement process that delivered significant savings on the scheme’s original expected cost.

The three main contracts that make up the FRC project were awarded in the Spring and Summer of 2011, with all three successful bids coming in under budget.

Lower than expected costs of these contracts means the total estimated cost range of delivering the FRC project was now £1.325 billion to £1.35 billion, a substantial reduction on the previous estimate of £1.7 billion to £2.3 billion.

The North and South Tower foundations required the use of huge steel caissions. Derived from the French for “casing”, essentially a caisson acts as a mould, enabling the concrete foundations to be formed under water and for sub-marine work to be carried out “in the dry”.

The Queensferry Crossing caissons arrived in May 2012, in huge container ships sailing up the Forth and under the neighbouring bridges to their temporary home in main contractor FCBC’s own dedicated area of the Rosyth dockyard. The sheer scale of the caissons used on the new bridge is remarkable. The largest is 30 metres high by 30 metres in diameter – approximately the size of an eight-storey building. It weighs a massive 1,200 tonnes, making it one of the largest steel caissons ever sunk down to the seabed anywhere in the world.

Ralf Wiegand, FCBC’s Senior Technical Manager on the caisson operation said: “Down the ages, one of the most important elements in the long-term success of any bridge structure has always been the foundations. In a cable-stayed bridge, which the Queensferry Crossing will be, foundations are key to the stability of the towers, which then support the anchors for the cables from which the deck is suspended. Critical to the success of the foundations are the steel caissons.” 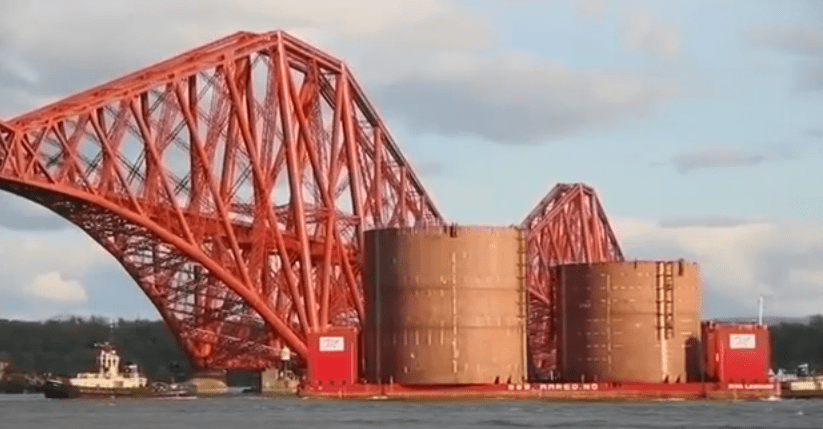 The south (larger) and north tower caissons arriving. The central tower on the beamer rock required no caisson.

Unlike the Caissons used in the building of the Forth Railway bridge, they were not pressurised, which can lead to “caisson disease”, which we now know as decompression sickness.

The caissons were floated into position before they were sunk. This was made possible by the caisson’s double skin, the cavity in between the two layers being filled with air. Once in position, water was pumped into their double-skinned cavity wall sections as ballast to increase the weight and help further sink the caissons down to the sea bed of mud and silt over-lying the bedrock.

A multi faceted process of removing the silt and securing the caisson to the bedrock was undertaken to allow for the concrete foundation to be made.

The impressive non-stop, day-and-night exercise – which took place over 15 days in August and early September 2013 – successfully poured 16,869 cubic metres of concrete into the foundations of the South Tower alone. The concrete was delivered by barges from the batching plant at Rosyth dockyards into position in the Firth of Forth at a rate of 47 cubic metres an hour.

The foundation for the South Tower is so deep and large that the “plug” foundation and the concrete subsequently used to get the tower up to water level (from 14m below) actually represents two-thirds of the entire concrete required for the whole 210-metre-high structure. That fact alone puts into sharp focus the sheer scale of works that have been happening out of sight and beneath the waves.

Over the next 2 years, thousands of people watched the towers rise to 207 meters, and the cabling and decking reach over the river to give the unique crosshatching of the cables, adding stability to the whole structure.

The Queensferry crossing at completion will be the longest 3 tower cable stayed bridge in the world.

The Queensferry Crossing: The Opening

The Queensferry Crossing will be officially opened by Her Majesty The Queen on 4 September 2017.

The ceremony, with activities taking place at both sides of the bridge, will include:

The new bridge opens to traffic for the first time on 30 August, prior to closing on 2-3 September for the Queensferry Crossing Experience, when 50,000 members of the public have the unique opportunity to walk across the bridge – following a ballot that attracted almost 250,000 entries.

On 5 September, an additional ‘community day’ has been added, giving up to 10,000 more people from local schools and community groups on both sides of the Forth the chance to walk on the bridge. From 6 September onwards the bridge will re-open to traffic with no pedestrian access.

“It is very fitting that the Queensferry Crossing will be officially opened by The Queen, exactly 53 years to the day from when she opened the Forth Road Bridge. Importantly, this celebratory event will recognise the thousands of people who have been involved in the construction of the new bridge.

“The Queensferry Crossing is a symbol of a confident, forward-looking Scotland and – as well as providing a vital transport connection for many years to come – it is a truly iconic structure and a feat of modern engineering.

“The Queensferry Crossing Experience attracted huge interest from across Scotland and beyond, demonstrating the widespread excitement and pride in the bridge. I am pleased that we are able to respond to that demand with an extra day being set aside for pedestrian access so that more people from the local area, particularly young people, can enjoy this historic occasion.”

“Scotland will celebrate a moment in history on 4 September as the Queensferry Crossing is officially opened by HM The Queen.  At this unique moment, the country will become the world’s first destination to have three bridges spanning three centuries in one stunning location. It is a time to not only celebrate Scotland as a nation of pioneering innovation, design and engineering, but also give thanks all those who have worked tirelessly to create this unique new structure.

“People are fascinated worldwide by bridges, whether it’s for their beauty, grandeur or breath-taking engineering prowess. The addition of the Queensferry Crossing consolidates the Forth Bridges as global icons of Scotland and we look forward to showcasing all three awe-inspiring structures to the world for many years to come.”

The Forth Rail Bridge

1890. The first of the three bridges. Over engineered in the wake of the Tay Bridge Disaster, it was designed to project strength and stability to the eyes of the travelling Victorians. It is perhaps one of the most recognisable structures in the world.

The Forth Road Bridge

1964. The Forth Road Bridge was the fourth longest in the world and the longest outside the United States when it opened. The bracing between the towers in the shape of a St Andrews Cross adds to its stylish appearance.