The importance of crossing the forth to vehicular traffic was underpinned when the Great Britain road numbering scheme was drawn up in the 1920s. The planners wished the arterial A9 to be routed across the Forth here, although the unwillingness to have a ferry crossing as part of this route led to the A90 number being assigned instead. 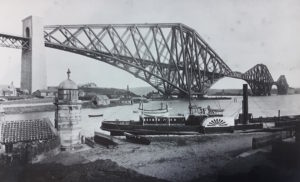 There was a period of renewed lobbying for a road crossing in the 1920s and 1930s, at which time the only vehicle crossing was a single passenger and vehicle ferry. Sir William Denny (William Denny & Bros, Paddlesteamers), championed the expansion of that service in the 1930s, providing and operating on behalf of the LNER company two additional ferries that aimed to supplement the services of the adjacent railway bridge. Their success allowed for the addition of two more craft in the 1940s and 1950s, by which time the ferries were making 40,000 crossings annually, carrying 1.5 million passengers and 800,000 vehicles.

With the then newest and nearest bridge spanning the Forth (the Kincardine Swing Bridge, built in 1936) still around 15 miles (24 km) upstream, the upsurge in demand for a road crossing between Edinburgh and Fife prompted the UK Government to establish the Forth Road Bridge Joint Board (FRBJB) by Act of Parliament in 1947 to oversee the implementation of a new bridge to replace the ferry service. In 1955 the authorities on either side investigated and drew up an alternative scheme for a tunnel beneath the estuary. This was known as the Maunsell Scheme, and was projected to run somewhat closer to the rail bridge than the present road bridge. The scheme was abandoned as being too ambitious and reverted to a bridge concept.

The Forth Road Bridge:
Timeline from Conception to Opening

In 1923 with the steady advance of the motor age, the need for a road crossing over the Firth of Forth became more urgent than ever. Though he didn’t live to see the bridge built, J Inglis Ker the motoring author and journalist was instrumental in its conception. Ker first presented his proposals at the Hawes Inn, South Queensferry in 1923. Crucially, he won the support of Sir Henry Maybury, Ministry of Transport, the following year.

One of the early design proposals, showing the bridge running to the east of the Rail Bridge.

1929: Work to investigate suitable sites for the road bridge began some five years after 30 Scottish MPs campaigned for the Ministry of Transport to agree to a survey. Messrs. Mott, Hay & Anderson was involved in the bridge plans from these very early days, the firm’s civil and structural engineers responsible for conducting these initial investigations. Three possible locations were examined and the possibility of a tunnel crossing explored.

In 1931 the George Washington bridge in New York opened, and in 1937 The Golden Gate Bridge across the mouth of San Francisco Bay opened. This reinforced the place of the great suspension bridge in the world of transport and motoring.

1957 the design model was shown in Edinburgh for the first time. At this time it would have been the fourth longest suspension bridge in the world.

1958: Finally, the green light was given for bridge building to begin on 10 February. Consulting engineers Freeman Fox & Partners worked alongside Messrs Mott, Hay & Anderson to oversee the bridge’s design and supervise its construction.

To save the contract from going overseas, the three largest construction engineering firms in Britain formed a consortium to take on the mammoth project. Comprising Sir William Arrol & Company, The Cleveland Bridge & Engineering Company and Dorman Long (Bridge & Engineering) Ltd, the group became known as the ACD Bridge Company Ltd.

Construction commenced at Port Edgar on the south side with the first pile being driven in by Mr John Maclay, the Secretary of State for Scotland.

1960: When the building of the towers was under way, people came from near and far to watch the bridge begin to take shape. Bridge construction at the time was a daunting task and it was fascinating for folk on the ground to watch the brave builders scale the emerging structure.

One interesting fact relates to the contract for the approach roads and viaducts at the immediate landfall on the north side. The contract was awarded to Reed and Mallik Ltd of Muir of Ord, Ross-shire. It provided for two 300 meter long tunnels. What you will see today of course is a deep cutting through the Ferryhills on the north shore.

1961: Once the cable anchorages had been bored into the rock on either side of the Forth and the bridge’s twin towers were in place, the cable spinning began. Because this method had never before been used in Europe, a training school was set up in South Queensferry for the would-be cable spinners. By August 1962, the men had created the bridge’s two enormous cables from 30,000 miles of steel wire – enough to reach around the world 1¼ times.

1963: On 20 December, the final two box girders needed to complete the main span of the bridge were swung into place. To mark the momentous occasion, the girders were swathed in the Union Jack and Lion Rampant. Remarkably, when the girders met, the two halves of the bridge were no more than an inch or so out of line.

1964: Its roadway and footpath completed, asphalt surfacing in place and lighting installed, the Forth Road Bridge was opened to great fanfare by HM The Queen on 4 September.

Sir Giles Gilbert Scott (1880-1960) was the consulting architect from the early stages in 1947, but never lived to see the bridge completed. His work was much and varied, from the Cambridge University Library to the Iconic K2 and K6 red telephone kiosks. Both his father and particularly his grandfather were renowned designers and architects.

1961 saw the completion of the main cable anchorages, bored into the rock on both shores, and the two main towers. The spinning of the main cables also got under way but – as the method of spinning several wires at a time back and forth across the estuary to gradually build up the main cable was new in Europe – a special training school had to set up in South Queensferry.

The Forth Road Bridge:
The Construction 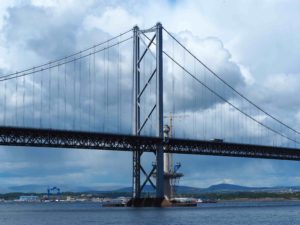 The Forth Road Bridge is one of the world’s most significant long span suspension bridges. With a main span of 1006 metres between the two towers, it was the fourth longest in the world and the longest outside the United States when it opened in 1964. In total, the structure is over 2.5 km long. A staggering 39,000 tonnes of steel and 125,000 cubic metres of concrete was used in its construction.

The bridge’s two main towers, with their distinctive “St Andrew’s Cross” cross-bracing, support the majority of the weight of the suspended span. The two main cables sit on saddles at the summit of the towers, which pass the load back down to the ground.

The towers are of welded cellular high tensile steel construction and rise some 156 metres above high water level. The maximum thickness of the steel in the towers is about 25 mm.

The pier for the north tower was sited on the Mackintosh Rock, a whinstone outcrop which made an ideal foundation. The south tower was located about as far from the shore as the depth of bedrock would allow the construction of a foundation with compressed air working. Caissons were used to found the pier on sandstone some 32 metres below high water.

The towers were strengthened in the late 1990s to allow for the increased weights of heavy goods vehicles crossing the bridge.

The entire suspended span and all the traffic is suspended from the bridge’s two main cables. These sit on top of the main towers and side towers and are anchored into the rock on either shore.

Each main cable is made up of 11,618 individual high tensile steel wires, compacted into a bundle approximately 60 centimetres thick. The total length of wire in the main cables would reach around the world one and a quarter times.

The cables were formed by spinning a few wires at a time back and forth across the estuary, gradually building up a cable capable of taking the load of the bridge. When spinning was complete the cable was hexagonal in shape – it was then compacted into the round shape we see today and wrapped laterally with 9 gauge galvanised wire. The cable was further protected by painting using red lead paste between the cable and wrapping wire and the whole cable was then painted.

This technique for spinning parallel wire suspension cables was first developed by John Roebling on the Brooklyn Bridge in the 19th century, and has subsequently been used on the Golden Gate, the Severn and many other famous suspension bridges worldwide.

The main cables are anchored at each end to take the 13,800 tonnes of total load in each cable. These anchorages are made of concrete cast in tunnels of tapering section cut into the rock at an inclination of 30º to the horizontal. The concrete is strengthened by steel post-tensioning strands grouted into conduits. The tunnel lengths vary between 56 and 79 metres.

All the bridge’s hanger ropes were replaced between 1998 and 2000, following the discovery of fraying on one of the ropes on the West cable. Each new hanger comprises a pair of ropes, each with its own single socket. This updated socket design is an improvement on the original, as it allows for just one rope of the pair to be replaced as required.

The suspended deck is made up of a steel stiffening truss with three longitudinal air gaps at roadway level to improve aerodynamic stability.

On the main span the deck is an orthotropic stiffened steel plate. However, on the side spans the deck is of composite construction – a 225 mm thick reinforced concrete slab on steel beams. On all suspended spans the surfacing is limited to a thickness of 38 mm.

The main expansion joints are embedded in the roadway underneath the main towers. Articulated trains slide over curved girders, allowing the suspended deck to expand and contract as required by temperature, wind loading and weight of traffic. They are the oldest and the largest of their kind in Europe.

The joints had been due for replacement in 2009, but the project has been deferred until after the opening of the Replacement Forth Crossing, in order to minimise costs and disruption to traffic. Failsafe devices have been fitted to ensure the safety of bridge users in the meantime.

The approach viaducts are significant structures in their own right. Reinforced concrete piers support a continuous deck structure consisting of twin steel box beams with transverse beams and outriggers. The deck is comprised of a reinforced concrete composite slab and 38 mm surfacing.

On the North Viaduct, at 253 metres long, is a continuous structure, and the intermediate piers are designed to flex with the structure.

At the time the bridge was built, the risk of ships colliding with the structure had not been addressed. To remedy this concern, significant improvement work began in 1996 to construct defences around the base of each of the main towers. Completing the work was not entirely straightforward, however – the breeding patterns of a colony of rare roseate terns nesting on the nearby Long Craig Rock restricted when work could be carried out.

The Forth Road Bridge:
Vital Statistics

The cables carry a total suspended weight of 16,000 tonnes distributed down through the north and south towers.

The Forth Rail Bridge

1890. The first of the three bridges. Over engineered in the wake of the Tay Bridge Disaster, it was designed to project strength and stability to the eyes of the travelling Victorians. It is perhaps one of the most recognisable structures in the world.

2017. At 1.7 miles the structure will be the longest three-tower, cable-stayed bridge in the world. It is also the largest to feature the cross hatching cables, adding extra strength, stability, and giving a distinctive elegance.