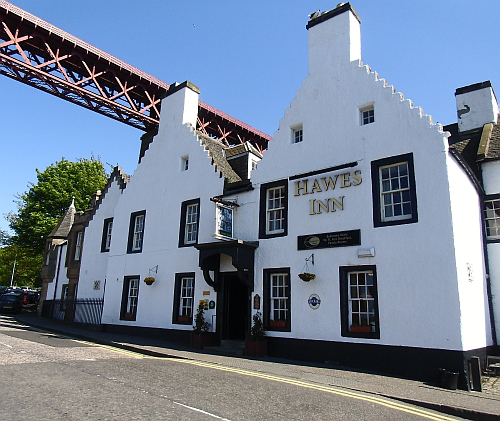 The Famous Hawes Inn, where the “Briggers” working on the Rail Bridge would take refreshment at the end of their shifts. 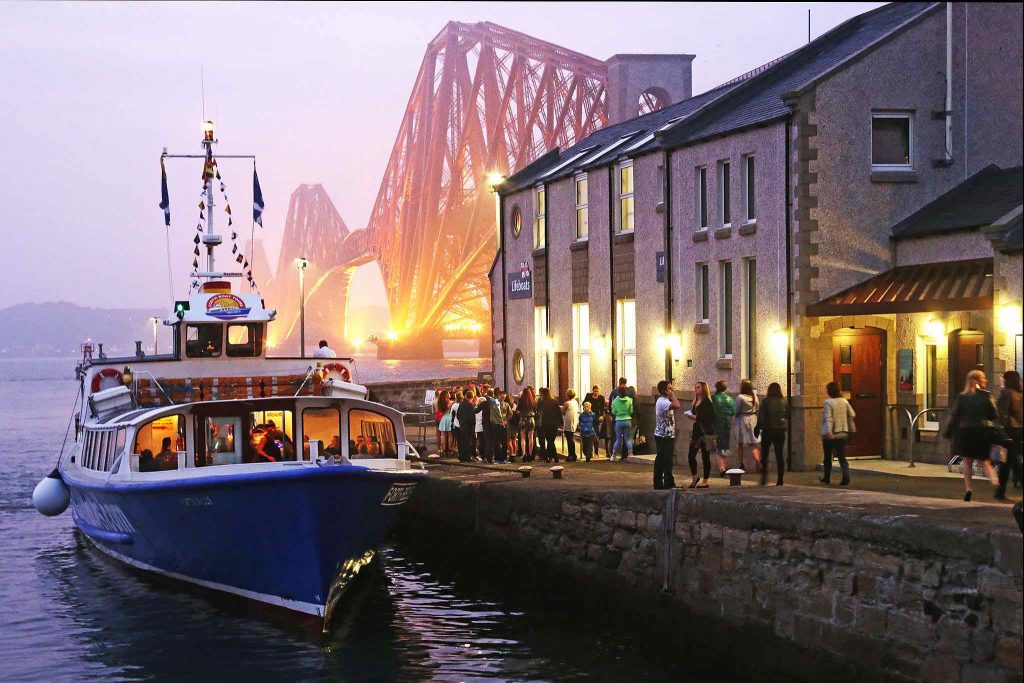 Boat tours are available close by.

South Queensferry is located on the southern shore of the Firth of Forth, between the iconic Forth Bridges.

Walk through the town or visit one of the cafés and restaurants which line the cobbled main street or browse the many small shops.
It is perhaps the best place to spend some time and view the Three Bridges.

There is also an excellent viewing area and car park at The Forth Replacement Crossing, Contact & Education Centre.

You can learn about the history of the village, and the building of the bridges at Queensferry Museum. South Queensferry was once the main point to board ferries over to Fife and is still a port today, although the boats are now destined for the islands of the Forth. Take a boat tour to travel under the Forth Bridge and explore the wildlife and history of the islands of the Forth Estuary.

The town is also a great place to start a coastal walk by joining the John Muir Way and following it through Dalmeny Estate and towards Cramond village to the East, which is on the boundary of Edinburgh city. 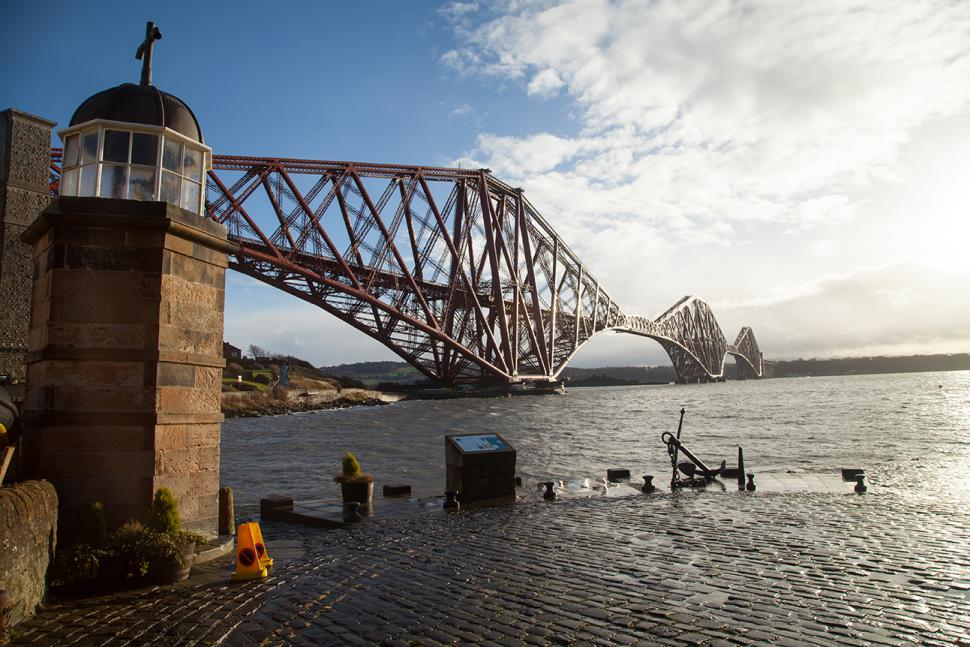 The picturesque village of North Queensferry is located on the northern shore of the Firth of Forth, between the iconic Forth Bridge, which is a UNESCO World Heritage Site, and the Forth Road Bridge.

North Queensferry is on the southern end of the popular Fife Coastal Path which is one of Scotland’s Great Trails and a signed long distance route between Kincardine and St Andrews.

The pier at North Queensferry is home to Queensferry Light Tower, the smallest one in the world of its kind that is still in use. Head to the pier to take a look and find out about its fascinating history. Until the opening of the Forth Road Bridge in 1964, the pier was the main port for ferries crossing the Forth.

These days, boats set off from North Queensferry to tour the bridges, wildlife, and the islands of the Forth. 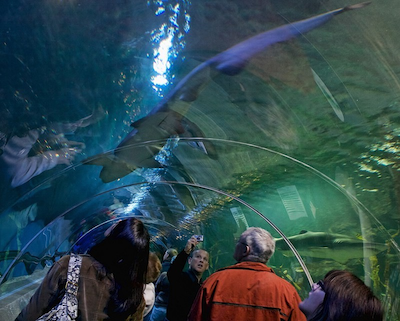 With more than 40 naturally-themed displays home to over 2,000 creatures – ranging from seahorses and stingrays to seals and sharks – the award-winning aquarium provides an incredible voyage of discovery through the planet’s rivers, lakes and oceans.

The incredible 4.5 million litre Underwater Safari is home to one of Europe’s largest collections of sharks – including 3m long sand tiger sharks – as well as hundreds of other fascinating marine life like rays, wrasse and mackerel.

Other displays feature everything from mudskippers and piranhas to lionfish and moray eels. Be sure to catch the daily dive and feeding shows and watch the divers as they feed the sharks in the underwater tunnel.

Plus SPAN: The Tale of Three Bridges: Created especially for Deep Sea World by the Fife Cultural Trust this is a fascinating day out for the whole family. Discover all about the brilliant and brave pioneers who created three iconic Forth crossings, build your own bridge, play giant snakes and ladders and don’t miss the electronic model railway bridge! Free entry as part of your Deep Sea World visit!

Hopetoun is a place of outstanding natural beauty, which has Scotland’s finest stately home at its heart. Situated on the outskirts of Edinburgh, Hopetoun is a welcoming and thriving 6,500 acre community with a great deal to offer for living, leisure, entertainment and business all the year round. Hopetoun’s farming enterprise also produces Estate reared beef, lamb and poultry plus wild game sold directly through Hopetoun Farm Shop located on the Estate.

The fabulous setting of built and rural heritage provides a unique day out and a magnificent location and venue for hospitality, or just to explore and enjoy the facilities provided.

Take the stairway up onto the roof, and you can view the bridges about 3km to the east.

Boat Tours on the River. 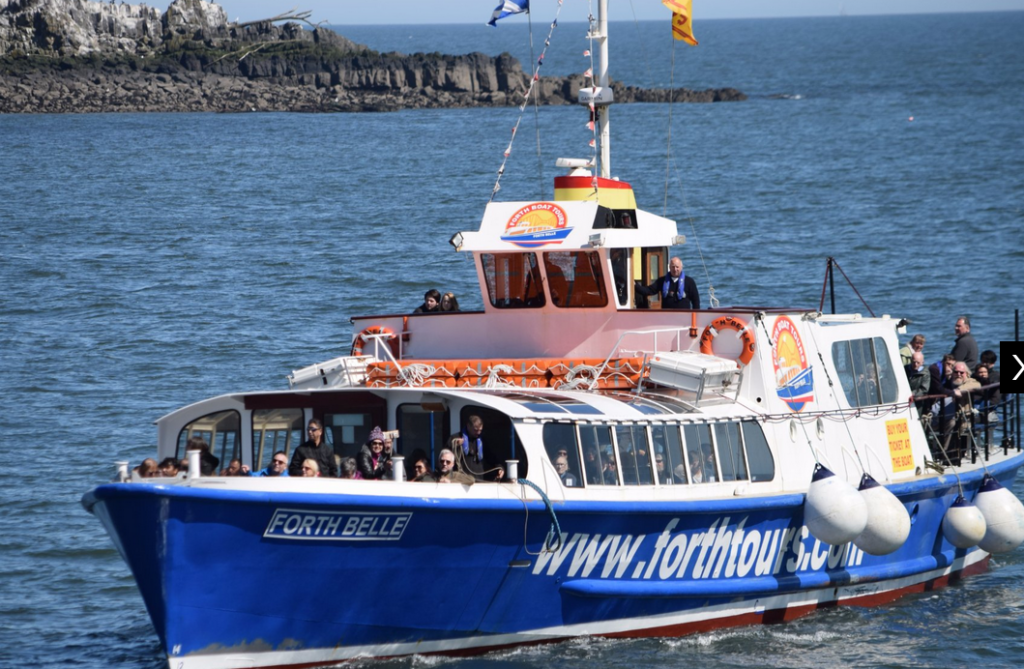 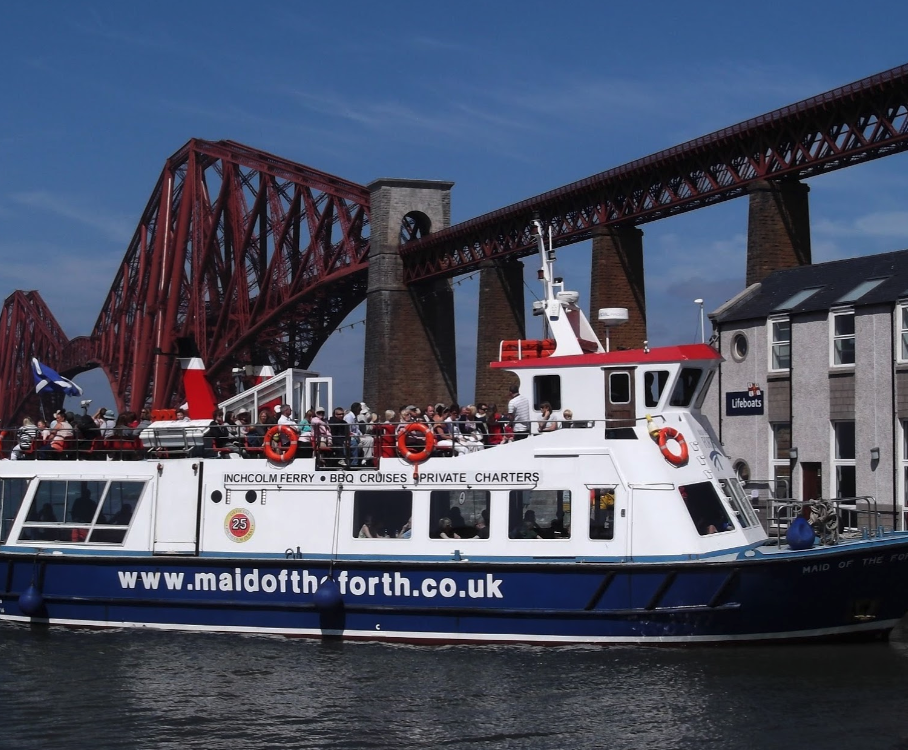 Boat tours leave from the pier beside the rail bridge.

A boat trip on the river is well worthwhile. You will see the three bridges close up and get a great feel for the sheer scale of the structures.

From Blackness castle to the east and Inchcolm island and abbey to the west, the shores of the firth have a long and varied History .

Charleston, and the neighbouring village of Limekilns.

Charleston is situated abou 3-4 miles west when you cross to the north side of the bridge and follow the A985.

It was a planned village created by Charles Bruce, the 5th Earl of Elgin in the 1750s. Not only did he give it his name, he also gave it his initials. The original layout of the village, still visible, is in the form of the letters “CE”, from his formal title of Charles Elgin.

This was all part of Charles’ grand design to make most effective use of his estate’s main assets: the coal and the limestone that lay under it. Lime had been processed at neighbouring Limekilns for centuries, but what Charles Elgin built at Charlestown was on a truly industrial scale.

The village was located on higher ground a little to the north of the coast. The 30ft cliffs overlooking the sea had limekilns quarried into them: six initially, the number eventually growing to 14. These remain today, besides what is now the approach road to a new housing estate. Opposite the foot of the kilns is the harbour created to carry the quicklime and the coal to the rest of Scotland and beyond.

It is difficult to imagine today, but Charlestown was once one of the biggest and most important industrial centres in Scotland. By 1774 the limekilns and harbour were served by the Elgin Railway, which also provided a link to Dunfermline. This originally had wooden rails and the wagons were hauled by horses, for whom stables and a granary were built.

And if coal extraction and lime conversion were not enough, Charlestown already had an established iron industry using locally quarried ironstone. There had been an iron mill on the coast to the west of the site of the village from about 1630, making the metal pans in which sea water was evaporated to produce salt all along the River Forth. The bay here is still called Ironmill Bay. Later the iron ore and coal from Fife was shipped across the Forth to feed the massive Carron iron works.

In the mid 1800s the harbour at Charlestown was extended and the Elgin Railway was converted to steam. Ships were built here for a time, but a more enduring industry was ship-breaking. Some of the German Imperial Fleet refloated in Scapa Flow after the First World War were towed here to be broken up. The naval theme continues a little to the west, where the piers of the Royal Navy’s armaments depot at Crombie project into the River Forth.

Lime production diminished from the 1930s and the limekilns at Charlestown finally closed in 1956. Work on their restoration began in about 1990 and today it is still possible to get a feel for the scale of what was once done here: though not the associated noise, heat and the smell.

The village itself retains much of its original plan. The Elgin Hotel was added in 1911, and a little to the north the granary and stables still stand, with the granary now converted into the village shop. Close by, in the Charlestown Workshops, is the Scottish Lime Centre, which celebrates the heritage of the industry around which Charlestown was created. 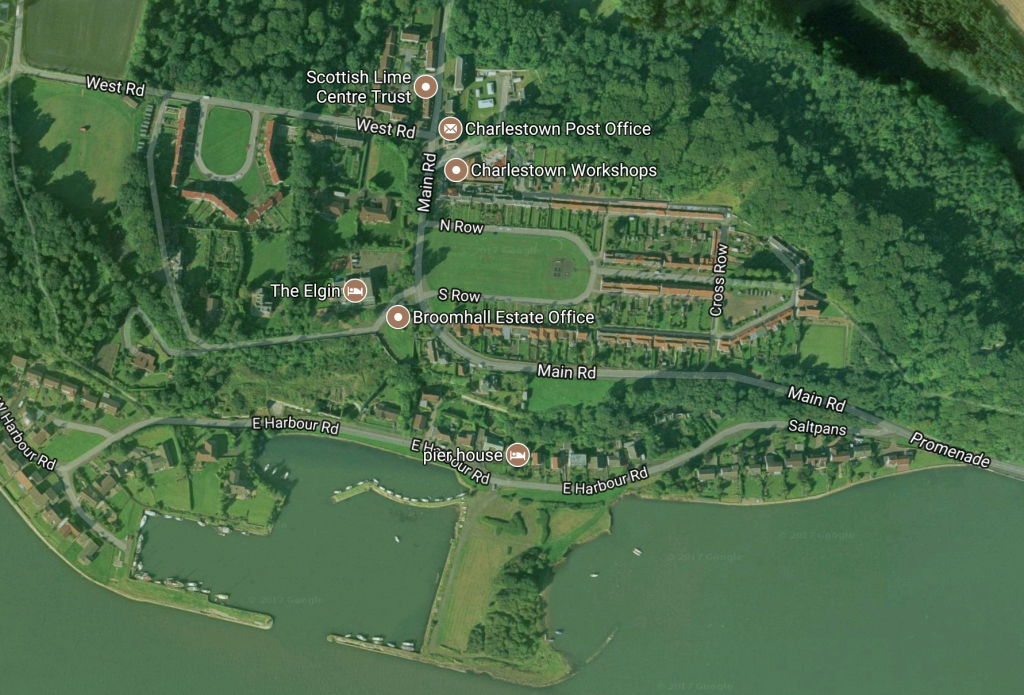