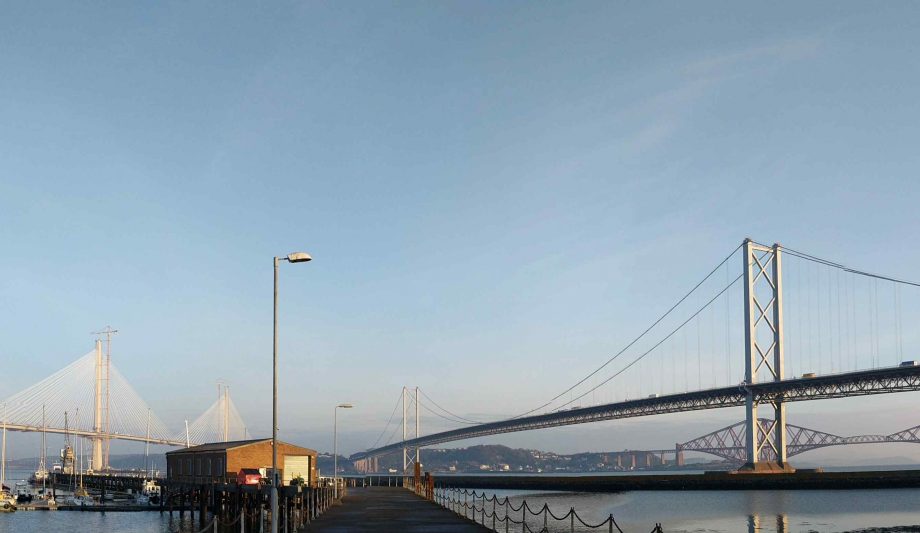 The River Forth leading to the Firth.

How to get there.


The Firth of Forth and river west of the Queensferry region.

The area round the Forth estuary is known to have been settled by Mesolithic hunter gatherers from about 10,500 years ago. From about 6,000 years ago the neolithic people introduced herding and later cultivation, but still still continued to gather from the bounteous oyster beds of the forth.

However as the centuries past, due to the over exploitation, these natural resources were diminished. The oyster beds were wiped out in victorian times, and about the same time the traditional fishing grounds were also decimated. Centuries of pollution had also added to the problem, and even with pollution being brought under control, the traditional fishing grounds are unlikely to return.

Over the centuries the importance of water traffic in the upper reaches of the Firth of Forth cannot be underestimated. For centuries the Inner Forth waterway played host to vessels of various sizes, which carried people, commodities and goods not only to and from Europe and beyond, but also between the north and south shores.

Historically, no less than four official ferry routes operated within the Inner Forth: Cambuskenneth to Stirling; Alloa to South Alloa; Kincardine to Higgins Neuk; and Charlestown to Bo’ness. The ferry at Alloa was first mentioned in charters dating back to the 14th century. By the early 19th century there was a demand for quicker and more reliable transport between the north and south shores of the Forth, particularly to service the local coal industry and glassworks. Ferries continued till in the latter part of the 19th century the Alloa Swing Bridge was built. Of course, this rail bridge would have reduced the amount of river traffic. In its current state only the vertical stilts remain, posing something of a barrier to navigation.

A bit further down the river, the construction of the Kincardine Bridge in the 1930s further reduced the need for ferry transportation across the river.

The Forth has always played an important part in the commerce of Scotland, having potteries, mining, ship building, ship breaking, oil refining, and a naval dockyard, playing a particularly important role during the 2 wars.

The Firth has 12 Islands, the only ones to be found on the east coast of Scotland. The Isle of May is the largest and is famous for the seabird colonies. The Bass rock is also home to about 150,000 gannets. Incholm is home to the Abbey, and Inchgarvie gives support to the central section of the Forth railway bridge. The west coast and the north coast are home to the majority of Scotland’s 790 islands. 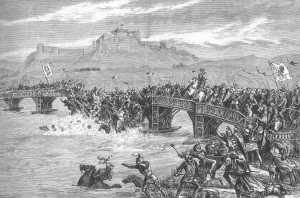 The Old Stirling wooden Bridge in the 1200s, depicted in the Battle. 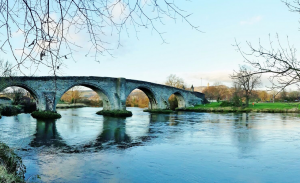 The river itself rises from Loch Ard 47 km (29 miles) upstream. The tide reaches as far as Stirling, which for many years was the lowest bridging point. A ford (crossing) also was occasionally used when the river was very low. A further 15 km downstream the river eventually widens between Kincardine and Airth to become the Firth of Forth.